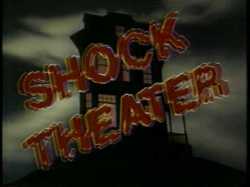 In 1957 Television Was Transformed By 52 Horror Films That Found Their Way To The Small Screen.

If you were a young kid in the mid 1950’s, the world around you was changing faster than the cars that breezed down the Highway at the then-incredible speed of 50 miles per hour.  WWII was still fresh in the minds of your parents, but the sheen of suburban life was showing a world mired in pleasant, quite communities that spanned every inch of a country that was completely civilized at this late mid-century date.  Rock ‘n’ Roll was taking the country by storm, comics had moved to war, love, western and horror stories, movie theaters had double and triple features that lasted all day long, and Television pumped a constant stream of entertainment into your home all day long.  When you weren’t riding your bike around with your friends or hanging out in a tree fort, you were collecting baseball cards and going outside to “play.”

It was into this world that Universal Pictures dropped their “Shock Theater!” package on America, and in many ways, the world has never been the same.  Imagine waiting until your parents were asleep, and then coming downstairs to explore this Television, this appliance in your home that provided a near endless font of things to watch and talk about.  Imagine turning on the screen, late at night, to find The Frozen Ghost or Night Monster coming at you on this glowing, flickering box.  It isn’t that kids were not familiar with horror, or even scary TV shows.  But these films were always on late at night, when the moon was high, a cold fog had rolled in around your home, and everyone else in your house was asleep.

While there were plenty of reasons to lie awake at night, trembling, after 1957, at least you could point to Shock Theater! and know that they were at least sharing the same cultural nightmare.

Who isn’t afraid of ‘The Wolfman’?

As Universal Pictures began to compete with the Television in terms of making money, it was clear that the company would need to have an entire division – nay, separate business entity – to manage this new market.  Companies were sending their films to up and coming TV Stations with the hope that their films would get more air time than anyone else’s.  But most production companies didn’t understand this new technology, and learning how to navigate broadcast times and on-air “packages” was something better left to experts.  Universal turned to a little business called Screen Gems, who not only specialized in selling films to TV, but had been doing into since the earliest days.  Universal handed over the keys to their back-catalog, and asked that Screen Gems get them a good deal, an help them retain the foothold on the market of Horror Films.

While most TV Stations had a packed schedule that filled nearly the entire day, there were huge swaths of time – late at night, when most stations went “off the air” –  that was difficult to program.  Most “average viewers” were asleep during these hours.  In most film-to-TV deals, the station would pay the film company for the “rights” to air something, and then run ads against the film to offset the cost.  What kind of ads could you sell for late night shows, where it wasn’t even clear if anyone would be awake to watch it?  Anything that you were going to show had to cost next-to-nothing, and yet couldn’t just be complete crap… could it?

With this “buy the rights” / “run ads” methodology to airing movies, another problem was coming up: no one wanted to buy potentially “bad” movies.  This problem had been circumvented by movie theaters in the old Studio System days, when a studio would force a theater to buy a whole package of unrelated movies, with a couple of great films, and a huge slew of z-list garbage that they were all required to run.  But TV Networks were a little too smart for this to work at first.  If they wanted King Kong, they wanted to pay a price that was going to make it worth their time to air King Kong.  The knew who was really helping who.

Screen Gems thought they could use this old tactic again, and combined the “package” sales idea of crap with few pieces of gold, and dropped the price incredibly for a 52 movie set.  The Shock Theater! package included a number of really great movies like Dracula, Frankenstein, The Invisible Man, The Mummy & The Wolf Man, and wrapped it all in an instantly marketable name.  The basic idea of selling a shitty movie with a good movie was still at the core, but by marketing this package in a unified manner, and by counting on selling it to a larger number of stations at a dramatically lower price, Screen Gems stumbled upon an instant hit that paid off because of the bulk nature of the deals.  Almost every station was interested in low-cost programming that could be cheaply recouped with only a few ads.  And, with 52 movies in the initial package, you could run a weekly movie almost without any audience, and still make a killing. 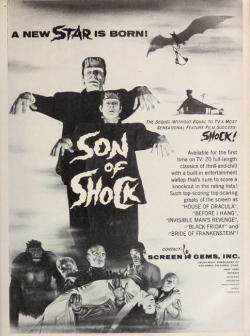 And With That, An American Institution Is Born.

With the success of the initial Shock Theater! package, Screen Gems assembled a new one – Son of Shock – which included 20 new films to complement the original 52.  Within the year, Horror Hosts of every variety were bringing you late night movies, all within the comfort of your own home.  The success of Shock not only solidified the idea of late-night movies on American television, but in the 60’s led to the development of Creature Features, which spread to even more stations across the country, and built upon the work that the Shock packages of the late ’50’s had laid down.

Within 10 years, midnight movies – usually hosted by a local talent that dressed up like a monster – went from unheard of to a standard at nearly every Station, a pretty radical shift in the landscape of American culture.  The influence of Shock is really immeasurable.  An interest in monsters not only launched magazines like Famous Monsters of Filmland, but gave American kids an appreciation of movies from the ’30’s that they would have never seen elsewhere, that in turn drew them into the theater for all sorts of revival shows.  Bands like Frankie Stein & His Ghouls, The Cramps and The Misfits seem entirely born out of growing up on Shock Theater! broadcasts.  Connecting late night TV with Halloween now gave everyone a reason to stay home at night, hopefully curtailing the problems that were developing as a result of Devil’s Night in the mid 20th Century.  (City officials in Cleveland actually claimed that crime went down when Ghoulardi was on the air, something impossible to verify but absolutely believed.)

With Shock Theater! there a homogenizing effect on the US.  Now, no matter where we lived, we were being exposed to the same movies, the same TV formats, and a sort of prurient access to narrative that was not the standard kind of thing we saw during the day.  Horror Hosts presented these horror movies like a ghost story, framed with the same kind of logic and humor.  It was a sort of unspoken agreement that we would all do this unacceptable thing late at night, and return in the morning tired, unnerved, but part of a shared experience we could discuss with our friends.  (“Did you see The Hypnotic Eye last night?  Crazy!”)