Tarantula Ghoul & Her Gravediggers!
(Originally broadcast on 9 October 2014 as part of the Daily NewsBlas.  Expanded blog entry written for this presentation.)

I can only imagine what it must of been like to tune in and see “House Of Horror” when it was first on KPTV on 9 October 1957.  At the time, there was talk of this woman down in LA doing a show… Vampira or something… and there were a number of stations across the nation where the guy who ran the lights was dressing up as some monster, and introduced late-night horror movies.  KPTV began to look around for someone to host their late-night Shock Theater package.  They looked around and saw, at the radio station next door, Suzanne Waldron. 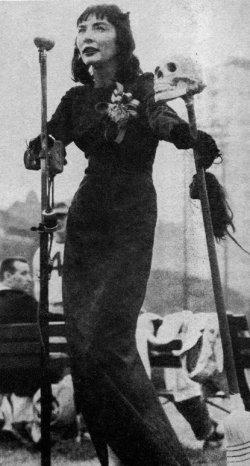 Suzanne was your typical post-WWII weirdo, who found herself feeling isolated and out of touch with her peers who were fairly “normal” and “average.”  She did her best to play along, and while her morbid curiosity and interest in both the library and the movie theater kept her out of trouble, it led to a fairly lonely lifestyle.  After school she caught the acting bug, and toured around with MacBeth until they returned to Portland, where she found a career doing voice-over work for local radio.  Comfortable off-camera, she was happy to lend her voice – something she would change and manipulate for the air – and was rarely recognized outside of the station.  The idea that she would be on camera, introducing the films seemed absurd at first.  She never fancied herself as an actress.  However, Tarantula Ghoul had other plans.

Once she got into costume, the personality was immediate and persistent.  She mocked bad actors, had a fiery wit that made people think she was as vicious in person as her character was on screen.  Her thin figure added to her lankiness when Tarantula was “on,” and between her time in prop coffins and posing with live snakes on her arms, she developed an other-worldly carriage, where she seemed both alive and dead in her movements.  Her ability to improvise in this character was what really sold her to the station.  Just turn on the camera, and point it in her directions, and she could make up something that was so spooky, and so very “Taranch” that scripts for her segments were rarely needed, unless there were other actors in the shot.  She would take a look at the film in the studio for a few minutes before she get into costume, and suddenly Suzanne disappeared, and the Ghoul took over!

It is no wonder that within the year or so that she was on, both she and KPTV capitalized on her personality in a number of ways.  Taranch was in demand to make public appearances whenever possible, and she milked these for all their were worth.  When it was clear she was a hit on the radio, too, KPTV asked her to record a 45 of ghoulish rock songs which they could market.  The single sold quickly and became a hit locally, but only dedicated fans knew of the record until the tunes were comped, sometime in the late ’80’s.  Both “King Kong” and “Graveyard Rock” were big hits in Portland, and got plenty of air-play.  She was the IT girl when it came to horror in the Northwest, and once she took the costume off, she was Suzanne again.  A nice gig if you can get it.

And then, just as quickly, the fad was over.  KPTV – and Suzanne herself – had moved on to other things, as the Shock Theater package was not getting great ratings locally, enough so for the station to move on to other things like Wrestling.  Tarantula Ghoul was still well loved, locally, and Suzanne was always very proud of the way people remembered her when a fan would approach her in public.  She passed away in 1982, and sadly, none of the broadcasts survived.  (KPTV just didn’t archive their shows in those days, not realizing there was any historic value to them.)  However, we do have her songs, which you can enjoy through the magic of modern technology.

I like to imagine what it was like to sit down with a very different kind of Cool Ghoul, one that understood not only The Pacific Northwest, but the monsters that roam around within it.

Tarantula Ghoul discussion board (with articles and links) (monsterkidclassichorrorforum.yuku.c0)

And yet another good Image Search turns up here.