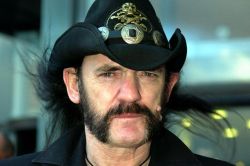 It isn’t that I want to be the flea on a house cat, or just to be contrary, but there’s always such a mixed bag of emotions when someone well-known passes away.  I was absolutely broken the day Leonard Nimoy passed away, but found myself at peace when Lemmy’s death was announced.  (Probably because I had seen Motorhead live four times, and felt lucky to have done so.)  I remember spending hours watching Nirvana videos the day Cobain killed himself, crying and maudlin over someone I never met, but was almost filled with glee when I heard about Jerry Garcia passing, and actually celebrated when Ronald Regan finally died.  We all have our own group of myth-makers that we respond to, and my love of Captain Beefheart can’t measure up to that of Robin Williams, no matter what the Inter-Web-A-Tron thinks I should feel that particular day.

It isn’t that I don’t like David Bowie.  I have a few albums, and there’s some songs of which I’m certainly a fan.  He was interesting, too, a character that was looking to create a certain kind of art, not necessarily art that was popular at the time, either.  He looked how he wanted to, acted how he wanted to, made music that reached and affected a lot of people, and made a huge impact.  I don’t want to deny any of that, or talk shit about him.  He was who he was.  He just wasn’t my favorite artist in the world.

And, even worse, not even the first well-known person to have died on January 10th of 2016.  A well known mathematician, two well known dutch sculptors (the other one is here), a well known writer, two additional musicians (American & Venezuelan), a LGBT activist, a footballer, a journalist, a politician, a businessman & an Australian yachtsman all died on the same day, and a few of them also went to cancer, too.  And that doesn’t even account for the scores of others that have already died in 2016.  Wikipedia’s Lists of deaths by year is quite eye-opening, and while that doesn’t mean that Bowie’s death isn’t a loss, or isn’t tragic, it is strange to consider all the other’s that are not being remembered as part of this event.

Humanity has never really done well when we try to cope with death.  The best we can do is invent an afterlife of some kind, speak to them as if they are still alive, and postpone the actual grieving until we are faced with the fact that this person really is lost, that they really are gone, that they are never coming back.  Sometimes we can process these kinds of events in real time.  But death is almost always sudden.  I didn’t go to bed on the 9th with any kind of preparation that I would wake up in a world without Bowie.  None of us did.  But it has happened, and we must learn to find a way to deal.

In a way, celebrity deaths are how we come to cope with the fact that humanity is dying.  The thought that there will never be any more Motorhead shows is a big thing to process, and it stands in for the fact that everything ends, eventually.  There was a time when there were never going to be any more Beatles, or Elvis, or Django Reinhardt, or Mozart.  But life continues.  Bowie has now been relegated to “old” culture status, and we will only now be able to live in a world that has lost that, and hundred and thousands of those who came before us.  Learning to live without new music is a bit like having to come to terms with Grandma dying, or the city we grew up in changing dramatically.

Yes, it is sad we lost him.  It is sad we lost everyone.  We should be mourning the loss of people, of those who were not famous but touched our lives anyway.  We should be learning to come to terms with everything that we might not ever see again, and not just new albums buy a guy who had done the bulk of his best work a few decades ago.  This should be an example of the amazing things that we have in front of us, and not a chance to dwell on the great things we used to have, that are completely gone now.

Nostalgia is great.  But it is too easy to feel steeped in it, to let it overwhelm us as we realize the thing we love is gone now, or different.  But celebrities will live on in our memory longer than our friends, or neighbors will, and rarely do we celebrate them with the same kind of grandiosity of a passed superstar.

No one will ever forget Bowie.  Who will remember everyone else that died that day?