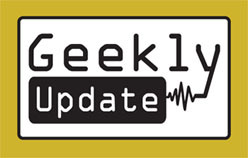 Every Sunday at 2 PM on KMUZ.

One of the first things I searched for when my wife and I hit upon the idea of moving to Salem was local radio, and I remember in those early days when I found KMUZ online.  It took a while for us to get our marriage and our life in Salem sorted out, and thus my involvement with KMUZ has been only a recent development.  I haven’t done a whole lot of mentioning of it (save for a passing reference in the last NewsZine), as I’m still the low guy on the totem pole, but I have been recently adopted by the team at Geekly Update, and have appeared on two recent episodes.

For those who haven’t listened yet, Geekly Update is a panel / talk show format program where guests and hosts talk about all of the topics-de-jour that are of interest to the nerdy and nerdy-adjacent.  Comics, novels, movies, TV, music, and anything that comes close to something you would find in your comic collecting friend’s house is covered on the show, and they’ve been going strong for a while.  Jason Ramey & David Duncan are the primary hosts, and run the show on alternating weeks.  The guests vary from week to week, but some recurring characters appear every week.

I will be archiving my appearances on this program over at AnywhereAnywhen.com, using my newly minted Geekly Update Feed.  In an episode from 27 December 2015, we gave an overview of the things we enjoyed from 2015.  In an episode from 3 January 2016, we talked about various pieces of culture and whatnot that we are looking forward to in the coming year.  (I had to phone in for the second show, as the roads were too icy for us to drive in for the show that day.)  I should mention that there was no show on the 10th due to host illness, but I will be back on the 17th, certainly, and hopefully Jason won’t still be sick.

I have been wanting to launch a talk show of my own for some time, and some out there may remember the original incarnation of A Momentary Lapse of Reason was focused on talk.  (That is, until Miss Rikki & I turned the show into a collage-based sort of dadaist presentation.)  But even that show was not going to have the kind of spirited conversation that we’ve had on these shows.  Plus, the subject matter is something that I’m passionate about, but don’t really have an outlet for at the time.  As someone with thousands of comics in my basement, I feel bad that I never address that part of my life.  Hopefully now I can.

So, make sure to tune in on Sundays, at 2 PM.  It’s a good time to listen live, and there will be a podcast either later that day, or by Monday at the latest.  Geekly Update.  It’s something new I’m involved in, and I’d love it if you listen.